"These fires are easy to prevent!"

House fires caused by dryers are far more common than generally believed, a fact that can be appreciated upon reviewing statistics from the National Fire Protection Agency. Fires caused by dryers in 2005 were responsible for approximately 13,775 house fires, 418 injuries, 15 deaths, and $196 million in property damage. Most of these incidents occur in residences and are the result of improper lint cleanup and maintenance. Fortunately, these fires are very easy to prevent.

For maximum safety, your dryer and vent needs to be inspected and cleaned every 6 months. Lint builds up quickly, especially if there is a small tear in your lint trap. This is preventable! Your Handy Guy will not only clean out your vent, we'll clean out your dryer and make any necessary repairs as well. For $200, you can save thousands, and possibly your loved one's lives! Don't let your duct look like this, call us now... 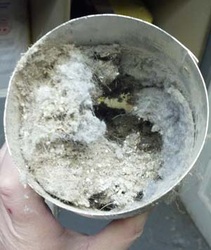 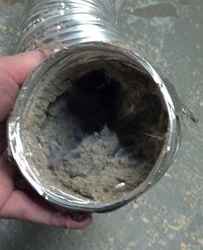 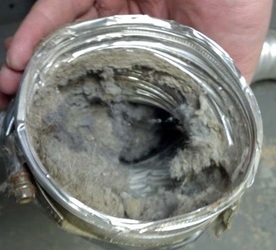 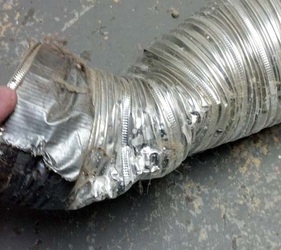 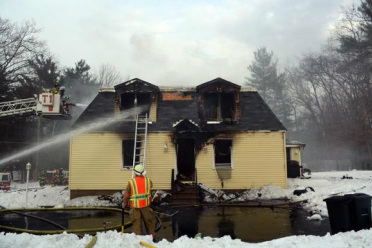 Don't let this happen to you. Call us to clean your vent!
WCBV.com Channel 5 News (12/20/13) WESTFORD, Mass. --
A community is coming to the aid of residents displaced by a house fire less than a week before Christmas.
The Daily family wasn’t home Friday when a 3-alarm fire destroyed their home on Beaver Brook Road. Fire officials say a dryer is likely to blame for the blaze that claimed the lives of the family pets.
"It’s never easy responding to fires or seeing people lose their homes, but especially at Christmas time it’s very difficult to deal with that,” said Lt. Shawn Girard.

Dryer Fire - Cape Cod Times (12/16/2012)
HYANNIS, MA - A small fire at the Cape Crossroads Condominium complex Saturday was contained to a dryer, fire officials said.  The fire happened just before 9 p.m.  "It was a dryer fire and the sprinkler contained it," said Hyannis Deputy Fire Chief Dean Melanson.  Six residents, two adults and four children from the unit were displaced because of water and smoke damage.

Dryer Fire - By Dick Bartlett - MetroWest Daily News (12/11/2012)
HOPKINTON, MA - Hopkinton firefighters responded to a working house fire at noon Monday.  Ashland and Milford also assisted at the scene.  Hopkinton firefighters extinguished a dryer fire.  The homeowner called in the fire at 11:54 a.m. and firefighters responded and extinguished the fire in four minutes, according to Deputy Fire Chief Stephen Slaman.  The fire was contained to the laundry room, but the home suffered extensive smoke and water damage estimated to cost about $50,000.

Fire Damages Apartment - By Kevin Fuller - Waltham News Tribune (11/26/2012) WALTHAM, MA - A fire damaged an apartment on Mt. Pleasant Street in Waltham on Monday night after a dryer vent caught fire.  According to Waltham Fire Department Deputy Chief Michael Quinn, a dryer on the first floor caught fire and spread through the wall up to the second story.  Two engines, one ladder truck and a heavy rescue truck responded.  Quinn said the apartment suffered mostly water and smoke damage.

Fire Overnight - Reading Patch (11/14/2012)
READING, MA - The Reading Fire Department responded to a fire on Village Street Tuesday night.  The fire started in the dryer, which was located in the basement.  When firefighters first arrived, there was a heavy amount of smoke coming from the house.  It took them about 30 minutes to put the fire out.  The dryer, the area surrounding it and the windows in the basement were damaged.  The fire department estimated about $10,000 worth of damage.